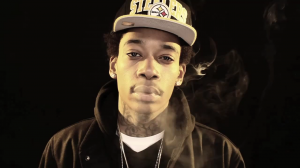 These days Cameron “Wiz Khalifa”  Thomaz, the rapper behind platinum hits “Black and Yellow” and “Roll Up,” is dealing with the highs and lows of superstardom.

Add to that the rapper’s venture into cinema with the stoner movie “High School” – which he’s making with his idol-turned-mentor, Snoop Dogg – and it seems like he can’t lose. Or can he?

A marijuana enthusiast, Wiz Khalifa was recently cleared of a felony drug trafficking count. In another odd twist, while visiting the Barney’s department store in Beverly Hills over the summer with girlfriend Amber Rose and their families, he was mistaken for a thief.

(Speaking of Rose, Wiz Khalifa’s public displays of affection with the former girlfriend of Kanye West have brought on the ire of fans who seem to think he loses credibility with every photographed hug.)

In this interview with CNN, Wiz opens up on his love for Amber, the best advice he gets from Snoop, why he’s cool with being called a “rock star” and all of the responsibility that comes with the title.

CNN: Where does the name Wiz Khalifa come from?

Wiz Khalifa: The name “Wiz” comes from me being the youngest dude in my age group of people that I hung out with. I was pretty good at anything I tried to do, so they would call me a young wiz. Khalifa is Arabic, it means successor/leader/shining light, and my granddaddy gave me that name. He’s actually Muslim and just saw my path, what I was doing and how hard I was working, and he gave me that name and I just put the two together.


CNN: You’ve been referred to as a “rock star.” Do you feel you’ve reached that status?

WK: It’s great because it just puts me in a different realm of how people see me. Of course I do rap music and I’m a hip-hop artist, but as an individual, as a personality and what I give to the people – it’s that perspective. I see myself as like the lead singer of a band or something [laughs]. When I go out there I’m a real performer, so I’m cool with [being called that].

WK: Just because of the vibe. Snoop is the boss dog, you know what I’m saying, and I’m a young boss so they see where I’m going with it. And even Snoop fully embraces me and gives me more [ammunition] for them to call me “young Snoop.” It’s a blessing, it’s a great thing, because I’ve always been a fan and everything that he brings is positive.

CNN: What life lessons did you learn from Snoop?

WK: He always just tells me to keep focused, to stay working when everybody’s not working. When people feel like they don’t have to work that’s when you’re supposed to be on your job. And always give back.

CNN: Let’s talk love and Amber Rose. Rappers aren’t supposed to be all lovey-dovey – what’s that feel like?

WK: It’s awesome to have that support and to have that base. It gives me structure, it gives me discipline and it helps me work on other stuff that’s much more important. I feel like everybody has some person that’s out there for them. If you tap into that and take advantage of it and hold it close and treat it like what it is, that’s when you’ll get – fully – out of it what you’re supposed to.

CNN: Let’s talk about your love for weed. How much are you spending these days? Give us a figure.

CNN: Would you see your financial habits or relationship with the drug change if it was ever legalized?

WK: It would be the same.

WK: Yeah, because it’s not about being illegal and it’s not about it being bad or anything like that, it’s about what makes me happy and what I know is not too dangerous. It’s a huge umbrella – doctors smoke weed, old ladies smoke weed, soccer moms, players, coaches – everybody smokes weed. I think it’s a common ground, it’s a peaceful ground.

CNN: You’re recognized more often now, but at a Barney’s store you were confused for a thief while shopping with your mom and Amber. Did that make you angry?

WK: It’s cool because I never have any expectations. I don’t expect to get the red carpet rolled out. Other people expect me to get [Hollywood]. That situation kind of blew up and Barney’s ended up sending me an email being like, “We apologize! Any time you come to the store…” It ended up working out in my favor anyway, by not blowing up and by just remaining who I am and being cool. That doesn’t bother me at all. The only time I would lose is if I give up who I am. As long as I stand up for me and what I believe in, I’ll be straight.

CNN: You started taking music seriously at 14. How has Cameron grown up as a person since then?

WK: I see myself [as] pretty cool. I was a cool 14-year-old, too. I always envisioned myself being a rapper and being in the game and having success, but you never know what it feels like or how you’re going to be when you’re there…Like from it being a dream and from just watching it on TV and seeing people’s tours to now having my own tour, having my own buses, having my own production. I shake the hands of all of my production guys my lighting guys, and I’m like, “Yo, you’re doing a great job!” It’s just knowing, the knowledge. I’m really, really happy with I’ve learned.