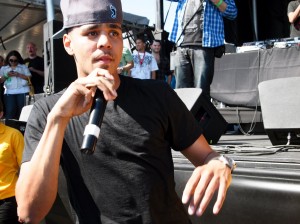 J. Cole’s time on hip-hop’s sideline is almost over.

More than two years after being hand-picked by rap impresario Jay-Z as the first artist on the music mogul’s fledging Roc Nation imprint, the 26 year-old Cole hopes to repay his mentor’s faith in him when his long-awaited debut “Cole World: The Sideline Story” is released on September 27.

Thanks to the high-profile endorsement and several critically lauded free albums released online, Cole has established himself as a leading voice in a new generation of hip-hop talent that includes artists like Drake, Big Sean and Wale. The North Carolina-native told Reuters the album balances different styles and lyrical content that reflect his meticulous approach towards crafting music.

“Like some rappers have, on my debut I could have gone super commercial,” said Cole of the album, which features appearances by Drake, Missy Elliott, Trey Songz (who appears on the single “Can’t Get Enough”) and, of course, Jay-Z.

“I could have just filled the album with eight or nine potential singles and hope that some of them work. Or, I could have gone the other route and been super stubborn, using only the personal material and not even worry about selling any records. What I ended up doing was the perfect balance of both. I have a number of all of those styles; the personal, deep records that are almost tear-jerkers and the fun, carefree records and super lyrical songs.”

Cole began pursuing a career in hip-hop while attending college at St. John’s University in New York City. Eager to prove himself in 2007, he waited for Jay-Z outside a Manhattan studio for hours in hopes of passing a demo CD to the legendary Brooklyn emcee, who initially brushed him off.

But two years later, upon hearing the song “Lights Please” from Cole’s first mix tape “The Come Up,” Jay-Z made the young artist the centerpiece of his new Roc Nation venture, and Cole credits his boss for contributing to his growth as an artist.

“He gave me a long leash to try and figure this thing out, make mistakes along the way, do the right thing,” said Cole. “He was always there overseeing and looking over my project and giving me advice on what direction I could take.”

Cole said that for a six-month period, he would bring his mentor potential singles, play songs for him and try to prove his worth.

He said he learned not to wait before he had a full song to pitch, but to take Jay-Z ideas that could be fleshed out by working with the head man.


“You get advice just through conversation,” Cole said about their relationship. “It’s not always about music. It’s about personal stories that happened when he was coming up, like when he realized he was on another level, when his fan base changed and how he handled it.”

Jay-Z’s advice for dealing with fame should be particularly useful to Cole, who’s own celebrity status is on the rise.

Earlier this month, he had his first brush with the tabloids when rumours began to swirl that he recorded a sex tape with fellow Roc Nation artist Rihanna while serving as an opening act on the singer’s Loud tour. Cole quickly denied there was any tape.

Even with the new found attention and pressure of high expectations, Cole is confident his debut will satisfy both his fans and his critics.