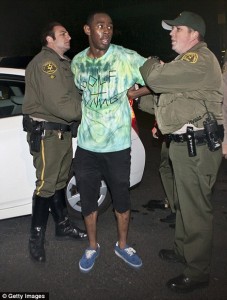 Tyler, The Creator was arrested last night following a show at a nightclub on the famed Sunset Strip.

The rapper, 20, who is known for violent and explicit lyrics, was charged with vandalising sound equipment in an LA nightclub.

The star, whose real name is Tyler Gregory Okonma, was performing with his rap group Odd Future at the Roxy Theater night when an electric soundboard was destroyed, causing the venue’s security team to call police.

‘Suspect Okonma exited the location and was placed under arrest by deputies for felony vandalism, due to the value of the electronic soundboard,’ said a spokesman for the West Hollywood Sheriff’s station.

‘As he was being escorted to a nearby radio car, the crowd exiting the venue became angry and rushed into the street towards the deputies.’

West Hollywood is a Los Angeles-area city in which many of the Sunset Strip clubs are located.

Footage from celebrity showbiz website TMZ.com showed the rapper being jovial while sitting in the back of a police car, while amateur audience video showed the rapper kicking items around stage before leaving the venue.

TMZ also reported that the rapper was taken into custody in front of his mother.

But Tyler, The Creator, who received the best new artist award at this year’s MTV Video Music Awards, took to Twitter on Friday to deny the reports.

He wrote: ‘I Wasnt In No Jail Or Arrested Or Nothing,’ before posting a video that showed a raucous crowd jumping onto the stage during the Roxy show.