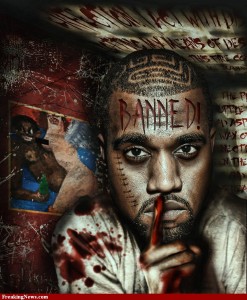 The music video for Kanye West’s single Monster has been banned by MTV. The television network made the decision to pull the video in response to an outcry over the way women are being portrayed in the footage.

At the forefront of the outrage are two activists Sharon Haywood and Melinda Tankard Reist, who created a petition asking MTV and Universal Music Group to stop promoting the video, and in the process managed to get over 1,600 signatures.

“The mainstreaming of videos like this increases desensitized and callous attitudes toward violence against women,” said Reist, one of the campaign’s originators. “Young people are seeing images and absorbing harmful messages which glamorize misogyny and brutalize women.”

Adding, “Women are reduced to sex-doll like playthings. So great is the level of desensitization that the barbaric treatment of women and girls is seen as normal and to be expected. We decided to run this campaign because we wanted to challenge the status quo.”

Their work isn’t completely done though, pointed out Reist, who said that they are determined to continue their campaign until Universal Music Group responds to the petition.