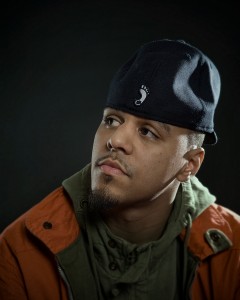 Self-described “bad motherfucker” J. Cole doesn’t like the dancey direction music — and, in particular, rap — has taken in recent years. After crossing 2 million Twitter followers last night, the upcoming NBA All Star Game performer tweeted a link to new song “Grew Up Fast”, wherein he chastises his peers: “Ya’ll got way too electro, damn near techno, halfway homo, way too metro.” Hear his diatribe below.

Another charming line amidst all the bragging about money and being the best in the game: “Tired of every chick saying she models before she swallows.”

Toward the end of the track, which leans heavily on a sample of late Temptations frontman David Ruffin’s “The Double Cross”, J. admits with a laugh that he’s “talking shit.”

Well, more power to the Roc Nation rapper for rhyming Jamaican, Hatian, datin’, Sanaa Lathan and Satan. But overall, the main feeling we’re left with after listening to “Grew Up Fast” is that we need to download “The Double Cross” ASAP.