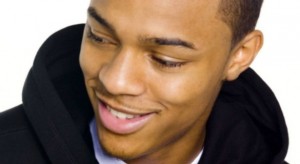 Bow Wow has revealed on his website that he has become a father.

“For the past three years [I’ve] been battling life,” Bow Wow wrote on his website. “I felt as if I had no purpose to live (thinking selfishly) until God gave me the illest gift of my life … nothing amounts to my lil girl.”

The rapper who rose to fame when he was just 13 years old explained that he kept his daughter a secret because he didn’t know how his fans would react to the news.

“I was nervous on how ya’ll would look at me. My lil girl is getting BIG fast. I love every minute of it. She inspires me to go harder. Even made me treat my mother better, it’s like it made me into a man overnight.”

Bow Wow did not disclose his daughter’s age or who her mother is but it seems that they don’t live together.

And even though he now calls himself a father, that doesn’t mean Bow Wow has shortened his ways with woman. In a video on his website, Bow Wow talks openly about the throngs of women who throw themselves at him night after night.

“I love women so that’s like my weakness, women,” Bow Wow said. “It’s just too easy, man. I mean you wouldn’t believe, you wouldn’t imagine what girls do just to get backstage or just to get to the hotel. I mean there’s times when I can rock a sold out show and get back to the hotel and there’ll be just a flock of women in the lobby waiting and willing to do what ever it takes just to get to me.”

Although life on the road doesn’t sound all that bad for Bow Wow, he admits his schedule does take him away from his daughter.

“Baby gotta stay with they momma and all dat bull. I hate that! So i have to fly 5 hrs away to see her,” blogged the rapper. “I miss out on so much that I now know how important it is to cherish and have those things in your life. Yes! I change diapers. Ain’t as bad as I thought.”