“Puppy Love” rapper Bow Wow, a.k.a. Shad Moss, announced he’s retiring from rap in a series of tweets this weekend. He also shared that he his next album NYLTH, executive produced by Snoop Dogg, will be his final collection.

“Over 10 million sold, 6 arena tours, 10 top 10’s, a few number 4 platinum albums, 2 gold albums. I’M DONE,” he tweeted. “?‘Retirement only means that it is time for a new adventure’ over 10 million sold. This the last one. THANK YOU.” He then shared, “Made over 20 million off rap. Why be greedy? I’m good with everything i accomplished. I made it to the White House.”

The 29-year-old artist continued: “I always said years ago i’d retire from music before 30. I just cant see myself at 30 years old rapping.”

“My last album will be executive produced by my uncle Snoop and myself,” he wrote on Instagram. “Since he brought me in the game, its only right i involve him and end it with him.”

Though Bow Wow began rapping since he was 13 and released Beware of Dog, he’s acted in titles like Entourage, All About the Benjamins, Like Mike, and CSI: Cyber usually under his given name, Moss. 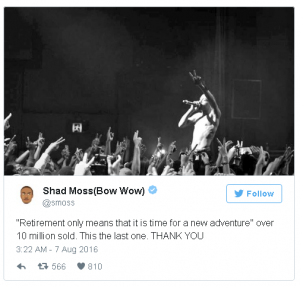