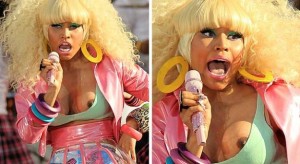 Nicki was performing in Central Park as part of a series of mini concerts on the prime time America breakfast show.

An energetic Nicki accidentally exposed her left nipple to the crowd as the concert was beamed live across the country.

The singer was shocked when she realised what had happened but continued to perform songs from her first album Pink Friday including Moment 4 Life and Super Bass.


The New York girl, originally from Trinidad and Tobago, spoke of her hopes to work with Madonna in the future and her aspirations for appearing in films telling the audience: “I’ve already started recording for Ice Age 4.”