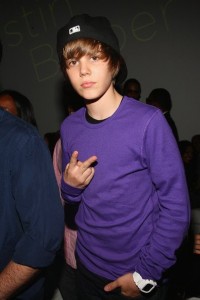 Having given fans a taste of his rapping skills during live performances of “Baby” when he tackles the verse Ludacris recorded for the tune, Justin Bieber is now displaying his keen spitting prowess in a new video posted on his Twitter. In the grainy clip, Bieber rhymes along to a track titled “Speaking in Tongues,” and in a message posted on the webpage, he announces that his rap alias is Shawty Mane.

“Speaking in tongues freestyle… who knew I could rap lol,” he wrote. “My alter ego rap name is Shawty Mane… hah.”

The video features shots of Bieber in the studio and hanging out in the streets rocking some glasses. Early on, he gives a shout-out to Lady Gaga: “Call up Lady Gaga on my on my telephone/ Hello doll/ You’re my girl/ Beats no metronome.”

He then talks up his own capabilities, rhyming, “So I’m raptor/ Tearing it up like a tractor/ Matter fact you’re not feeling this track you’re a slacker.” Later, he raps, “Stop, drop and roll/ Justin Bieber’s on fire/ It’s time to realize it’s time to call me young sire.”

At the end of the clip, Bieber — who hangs out with such hip-hop heavyweights as Drake, Kanye West and the aforementioned Luda — has a little message for those listening to the track. “You guys might know me as the guy who sings ‘Baby’/ You know, uh, I’m a singer, pop singer/ I’m white/ But, um, you know I just wanted to do this just to prove that/ You know I got skills, on, on, on the rap game.”

Last December, Bieber’s pal, rapper Asher Roth, defended his buddy’s rapping skills to MTV News. “He lived like a block away from me. Watching him is like watching your little brother. It’s crazy,” Roth said, referring to their time in Atlanta together. “He can rap. I put him on a remix, but I don’t think his mom would like that very much.”

What do you think of Bieber’s lyrical skills? Talk about it in the comments!