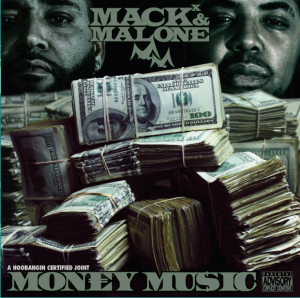 Two of the West Coast’s biggest players get together for what’s suppose to be a dream come true for many West Coast fans. Underrated MC Glasses Malone and veteran O.G. Mack 10 come together to release the collabo Money Music.

The opening track Everybody Gotta Go finds Glasses in an intense situation as he plays the role as a gangsta. This is a great intro and looks to be a sign of good things to come. Unfortunately, the rest of the album is a bunch of fill in songs with no concepts and awkward Dirty South beats that have no business being there.

Got It Like That is a nice effort. But Dear DEA, featuring Richie Rich, is a smooth filled track that will qualify as cruising music. The duo try to switch things up by showing some diversity on Girls Everywhere. The song is definitely for the clubs. But ultimately it fails due to the fact that it just didn’t match. West Coast artist’s on a Dirty South beat usually don’t go well. Other tracks like Back II Bizness, Clint Eastwood, and Love Letter just don’t blend well. It seems as if they hand picked some tracks to fill the album.

Simply put, the album is a let down. But for Mack 10 who has been in the game for almost 20 years, this won’t stop him. And for Malone who is still considered “new” by many fans, he’ll have to come harder on his next attempt to get the recognition he badly deserves.