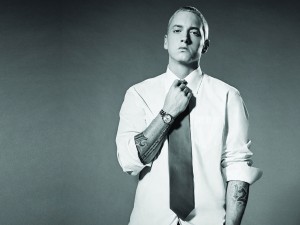 Eminem and Royce da 5’9″ are back recording together more than a decade after the Detroit rappers first joined forces.

The pair, who met at a concert in their home city in 1997 and worked together under the name Bad Meets Evil, announced Monday that they’re coming out with an EP of new material in June.

One of the songs they recorded in the late 1990s, called “Bad Meets Evil,” appeared on Eminem’s major label debut, “The Slim Shady LP.”

According to a news release distributed Monday by Interscope Records, the rappers pursued solo careers after their initial work together and became embroiled in a feud.

In the years since, Eminem’s career has reached superstar levels with tens of millions of records sold and Grammy and Academy Award wins. Royce da 5’9″ also has seen success, but on a much smaller scale, with three of his albums charting in the R&B/hip-hop category.

The two mended fences, however, following the shooting death of their mutual friend and fellow rapper Proof in 2006.

“Royce and I started hanging out again and inevitably that led us back into the studio,” Eminem said in a statement. “At first we were just seeing where it went without any real goal in mind, but the songs started to come together crazy, so here we are.”

Royce da 5’9″ said he was “excited to see this project come to fruition considering the long lapse in time between when we worked before and now.”

The new material will be released June 14 on Shady/Interscope Records. Mr. Porter, who is a member of Eminem’s rap group D12, was a producer on the EP.

Interscope said its title will be unveiled “soon.”