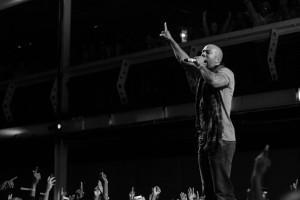 Common is pacing the room like a prizefighter, his left arm extended above his head as he mouths the first 10 words to “Sweet,” a song off his new album that is anything but. As the speakers rattle at Roc the Mic Studios in Manhattan, Common nods along to the rhythm and echoes weighty declarations like, “I’m to hip-hop what Obama is to politics,” and “I’m the franchise, so I rock my own chain.”

“Sweet” may be the cockiest track that Common has ever recorded, but it feels at home on his insatiable new album, “The Dreamer/The Believer,” released Dec. 20, 2011, on Think Common Music/Warner Bros. Records. Ditching the electronic vibe of 2008’s disappointing “Universal Mind Control” (G.O.O.D. Music/Geffen), Common has regained his soulful swagger on his ninth studio set with the help of No I.D., who produced the entirety of “The Dreamer/The Believer.” The project debuted at No. 18 on the Billboard 200 with 69,000 copies sold (according to Nielsen SoundScan) and scored favorable reviews from such magazines as XXL, Paste and Prefix.

Common had grown up in Chicago working with No I.D.-the producer was heavily involved in early Common projects “Can I Borrow a Dollar” and the rapper’s breakthrough, “Resurrection” (which No I.D. also produced in its entirety) — but the pair hadn’t stayed in close contact as No I.D. moved on to helm tracks for artists like Jay-Z, Ghostface Killah and G-Unit. After running into each other at the 2006 premiere of Common’s film “Smokin’ Aces,” the two bonded again, and in September 2010 they laid down a handful of tracks at No I.D.’s Los Angeles studio.

“Working on this, it was more like, ‘We need an interlude, we need an emotional song, we need a single/radio song, we need a club song,'” says No I.D., who was named Def Jam executive VP of A&R in August. “You can think about the whole process, knowing what’s there already, versus going in to work with somebody and not knowing what else they’re going to get from somebody else.”

Common had wrapped primary work on the album in March when an invitation from first lady Michelle Obama to attend a poetry event at the White House pushed him in the middle of a conservative media cross-examination. Fox News’ Bill O’Reilly and former Alaska governor Sarah Palin condemned the rapper’s track “A Song for Assata,” which focuses on the controversial conviction of former Black Panther member Assata Shakur and appears on his fourth album, “Like Water for Chocolate,” as a plea for Shakur, who has maintained her innocence in the 1973 killing of a New Jersey police officer. Common, who attended the May 11 reading without incident, says the media scrutiny simply helped spread the message of “A Song for Assata.” “Even if they did delve into my lyrics, they’d see that I was speaking up against police brutality,” he says.


The political controversy certainly didn’t scare away Warner Bros. Records: After spending a decade on Universal Music (and the past seven years under the umbrella of fellow Chicago native Kanye West’s G.O.O.D. Music, where No I.D. served as label president), Common announced a distribution deal with Warner on June 24 for his own imprint, Think Common Music, which will primarily handle the release of “The Dreamer/The Believer.” “That was more of us wanting to take control of our assets, in a situation where we could own our masters,” manager Derek Dudley says.

“The Dreamer/The Believer” was originally slated for a Nov. 22 release, but was pushed back to Dec. 20 partly because of Common’s commitment to “Hell on Wheels,” a new western TV series that filmed its first season last summer in Calgary, Alberta, and premiered Nov. 6 on AMC. Show creators Joe and Tony Gayton describe the rapper, who stars as a freed slave named Elam, as the hardest-working man on the set.

“He was the first major part cast in this thing,” Tony Gayton says, “and we wanted to be very clear with him of the privations he would be suffering during the production of this television show-that it was going to be cold and rainy, there could have been snow, and it’s a basic cable show and there’s a brutal shooting schedule. He kind of smiled and said, ‘I’m up for all that.'”

In addition to “Hell on Wheels,” Common stars in the forthcoming independent film “L.U.V.,” scored a supporting role in Disney’s “The Odd Life of Timothy Green,” lent a voice-over spot to “Happy Feet Two” and appears in a bit part in the ensemble comedy “New Year’s Eve.” The acting gigs have ultimately helped spread the word about “The Dreamer/The Believer,” with recent appearances on “The Tonight Show With Jay Leno” and “Chelsea Lately” used to promote both his acting roles and the new album.

Common will likely hit the road next year, and Dudley says the rapper’s camp has discussed the possibility of a co-headlining tour with Nas, who appears on the new album track “Ghetto Dreams.” “There’s nothing set in stone,” Dudley says.