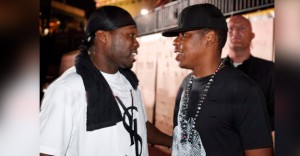 Last year around this time, the ever controversial machine known to the masses as 50 Cent was busy sending disrespectful rhymes in the direction pointed at fellow New York rap superstar Jay-Z. For the past months the Queens native had been baiting the god MC on wax with the assistance of former Roc-A-Fella artist Beanie Sigel.

Following Jay And Eminem’s opening night of their “Home And Home” tour at Detroit’s Comerica Park, Fif and Jay-Z deaded their beef backstage after the two ran into each other.

“We got a chance to kick it for a minute,” 50 told MTV News. “I know people were interested in what that conversation was like. But they can ask Jay-Z. I take people’s actions as if it’s genuinely how they feel. I can only use what I saw you do as if that’s what you meant. I can’t understand what your motivation was prior to that.”

As things appeared to have taken a more peaceful route following the union, the G-Unit general may have just re-opened that can of worms. In a recent interview with MTV UK, Fif calls his relationship with Jay-Z “business” and says he uses it as leverage for his own interests.

“We don’t have those kinds of relationships” 50 declared. “These people are people I associate with. We are in the same business. We are not necessarily friends. We don’t call each other for no reason.”

“It’s not like we have something against each other to make us enemies,” Fiddy continued. “Me and Jay[-Z] will use each other. Repeatedly. For energy.