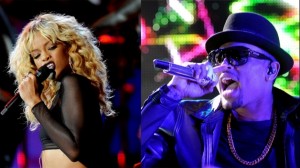 Chris Brown and Rihanna are dangerously close to getting back together, sources close to the ex-couple tell TMZ — but the singers’ friends are desperately trying to keep them apart .. for their own good.

According to sources, Rihanna is still head over heels for Chris — despite that fateful night 3 years ago when he brutalized her — and if it weren’t for the media and her fans, she would already have taken him back.

Now, sources tell us, Rihanna and Chris’ friends are terrified they’ll get back together — and they’re doing everything they can to prevent a possible reunion.

According to sources, friends on BOTH sides have expressed extremely strong reservations to Ri and CB about spending so much time together … warning it’s a terrible idea … personally AND professionally.

But with Rihanna’s birthday [Read About] … Chris and Rihanna’s duets released this week … friends fear they’re fighting an uphill battle.

As one source put it, “You can’t hold back love.”