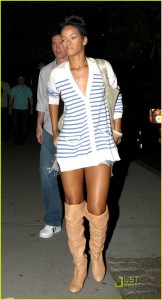 Are Rihanna and Ashton Kutcher Hollywood’s newest couple? Maybe! Earlier this week, Rihanna was spotted by TMZ photographer’s arriving at the actor’s $10 million dollar bachelor pad right around midnight. But this was no quick visit. The Bajan beauty didn’t leave Kutcher’s place until after 4 am!

News of Rihanna and Ashton’s last night date broke right as rumors surfaced that Ri had once again dumped her on-again-off-again boyfriend Chris Brown. Despite the fact that Brown has a serious girlfriend, many believed he and Ri had been dating on the side. Until yesterday (March 22), that is, when Brown changed his Twitter profile picture to a Vincent van Gogh painting of a weeping man and cryptically posted the phrase “At Eternity’s Gate.”

So has Rihanna moved on to a new fling with Ashton? The pairing isn’t as random as it seems — these two have more in common than many realize! Both stars have been involved in past high-profile relationships that ended dramatically — Ri with Chris Brown and Ashton most recently with Demi Moore. The new friends also have intertwining social circles — Ashton is close friends with Diddy, who is pals with Rihanna’s mentor Jay-Z.

Do you think Ri and Ashton would make a good couple?