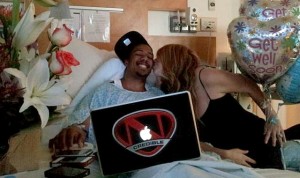 What a difference a week makes! Just last Wednesday (Jan. 4) Nick Cannon was hospitalized in Aspen for “mild kidney failure” during a holiday with his wife Mariah Carey and their twins. The rapper turned ‘America’s Got Talent’ host was then airlifted to a hospital in Los Angeles where he went under the knife on January 6 for kidney surgery.

“Just left the operating table and I was awake during the whole procedure. #OUCH,” Nick tweeted after the ordeal. His wife did some tweeting of her own post-surgery, posting on the social media site that “Nick is in stable condition with a good prognosis, hopefully he’ll be discharged within 2 days. As always he’s laughing and in good spirits.”

Well it looks like Mariah’s wish has come true with news today that Nick has been released from the hospital and is healing at home, surrounded by those he loves.

“Nick was released over the weekend to be with his family,” Cannon’s rep tells Us Weekly in a statement. “He is resting and recovering at home and would like to thank everyone who has expressed concern, well wishes and prayers.”

A thankful Mariah also wanted to express her gratitude to fans who sent their positive thoughts and prayers during Cannon’s trying time. “Nick is getting better,” the singer tweeted Sunday. “We love and appreciate all the ongoing kind words.”

Cannon must be as strong as the Superman character he idolizes. The hardworking father of two is expected back at work on his radio show Rollin’ With Nick Cannon, on January 17.