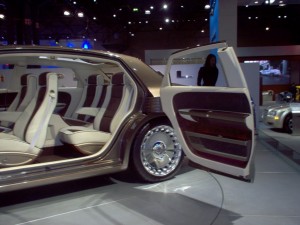 Suicide doors—often referred to by automobile manufacturers as “coach doors” and “freestyle doors”—are car doors that are hinged on the side closer to the trunk rather than at the front. Sometimes rear-hinged rear doors are combined with front-hinged front doors (as in the photo above) to create a yawning effect when both doors are open. Popular in the early 20th century, suicide doors were largely abandoned by car manufacturers after the 1960s. They began reappearing sporadically, however, on new models in the late 1990s and early 2000s, around the same time they began appearing in rap lyrics.

Why did suicide doors fall out of fashion after WWII? It may have something to do with the fact that they’re not terribly practical. By some accounts, getting into and out of cars with front-hinged front doors and rear suicide doors requires careful maneuvering, since—if there’s no pillar between the doors—the front door must be opened before the back door can open. But the alternative, a rear suicide door that’s not secured by a conventional front door, can be dangerous: If the suicide door becomes unlatched while the car is in motion, the air flow will throw it open, making it very difficult to close. One automobile journalist has suggested that suicide doors may have been a murder weapon of choice among 1930s gangsters (and that the very name “suicide doors” may be gangster innuendo)—if you want to throw someone out of a car, it’s much easier to get his door open if it’s hinged at the rear than at the front. And suicide doors have been associated with 1930s outlaws in the popular imagination; consider the titular characters’ car in Bonnie and Clyde, or gangster-movie icon James Cagney in this photo.

This association might go part of the way toward explaining why suicide doors are so popular in hip hop lyrics, which often draw on gangster imagery. Songs like Jay-Z and R. Kelly’s “The Return” and 50 Cent’s “Gunz Come Out” place the term “suicide doors” in close proximity to allusions to gun violence. Suicide doors evoke an Al Capone-era vibe that jibes with the threatening demeanor rappers often cultivate.

Some romantically minded lyricists have used suicide doors’ capacity to open wide as a metaphor for sex. In “69,” T-Pain invites the object of his desire—for whom he has “been doin’ tongue exercises”—to exchange oral sex “in the back of my Lincoln with the suicide doors.” Juelz Santana’s analogy in “New Star in Town” is less subtle: “Let me open up your legs like suicide doors,” he pleads.

This request may not be a persuasive one, but Santana’s simile works (recall the yawning effect), and it highlights the symbolic richness of suicide doors: They can credibly evoke death, money, and sex—a lyricist’s trifecta.