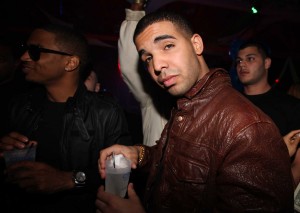 The Drake tattoo that is as recognized as the rapper it was inspired by is still causing a stir, this time as a result of the artist who inked the permanent moniker onto a young woman’s forehead.

Tattoo artist Kevin Campbell, an employee of Will Rise tattoo shop in Los Angeles, claims the 25-year-old ‘Take Care’ creator sent security guards into his place of business to confront him regarding the tat. For those not in the know, Campbell is responsible for tattooing Drake’s name onto the forehead of a woman. Drake publicly denounced the act in an interview last month and he also threatened Campbell, calling him a “fucking asshole” and promised to “fuck him up.”

On Jan. 11, during a Twitter exchange with a user named @Matt_Kaleta, Campbell was questioned about whether the war of words with Drake ever amounted to anything. Campbell responded, revealing that the Toronto-born MC allegedly showed up to the shop he is employed at but failed to actually show his face. “guess you could call it sorted out. When Drake was in LA last, he parked out front the shop and sent in his huge security dude [sic],” Campbell tweeted.

Campbell then went on to interact with Twitter user @KingLACity, informing him that the ‘Headlines’ rhymer “sent in the troops” rather than addressing him directly. “yeah, he should have just let it go, I doubt anything would have come of what he said anyway. It just made him look silly IMO,” the tattoo artist wrote.

Do you think Drake should have faced Kevin Campbell himself? If the artist’s statements are indeed true, it would have been in the Young Money MC’s best interest to address Campbell rather than rely on security guards to test the waters. After all, his current lyrical war with Common has him skating on thin ice with critical hip-hop heads who believe he may truly be as “sweet” as the Chi-town rapper claims he is.