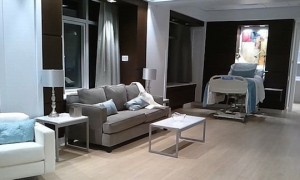 An official at Lenox Hill Hospital in NYC tells TMZ … there are 7 suites in the VIP section where Beyonce gave birth. Each executive suite costs between $700 and $800 a night.

We’re told the suites have “reconfigurable designs.” Translation — the dividing walls are movable so the VIPs can expand into more than one suite.

In Beyonce’s case, the official wouldn’t be specific, but we’re told she had at least 4 suites — which could explain the 4 flat-screen TVs. So Beyonce probably paid $3,200 a night — she can afford it.

We’re told any patient can use the rooms, provided it satisfies the needs and treatment of the patient.

The official indicated there has been intense interest in the suites, repeatedly telling us patients can book them subject to availability.