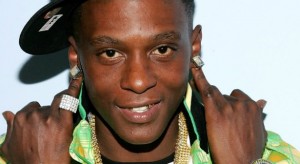 Louding confessed to detectives that Lil Boosie wanted Nussie killed, after the rapper was allegedly disrespectful to one of Lil Boosie’s associates during an altercation.

According to The Advocate, Lil Boosie hired Louding and another associated named Michael “Ghost” Judson to murder Nussie, as well as another man named Terry Boyd.

Only Michael Louding is on trial for the murder of Christopher “Nussie” Jackson, because Judson is dead.

Louding’s trial for murdering Nussie is just the start, as he has been charged with five other murders between 2009 and 2010.

Rapper Lil Boosie, born Torrence Hatch, is also charged with first-degree murder in one of the killings.

Prosecutors claim to have evidence that Lil Boosie hired Louding to shoot a man named Terry Boyd in October of 2009.

Lil Boosie, 28, was not charged in the death of Christopher “Nussie” Jackson, because he did not have direct contact with Michael Louding prior to Nussie’s murder.

Earlier this week, Lil Boosie was accused of attempting to smuggle drugs into a second state prison in Louisiana.

The rapper was indicted for trying to smuggle codeine into Angola State Prison, as well as the Dixon Correctional Institute at Jackson, where he was previously incarcerated, while serving a 10-year sentence for possession of marijuana.

Prosecutors are still debating if they are going to seek the death penalty against Lil Boosie.