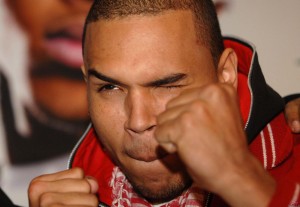 If Chris Brown can find himself a partner, he might consider staging a tag-team wrestling match against Miranda Lambert — the country singer he’s been feuding with lately — and his latest celebrity foe, WWE grappler CM Punk.

CM started the drama with a Twitter post last week. Alluding to Brown’s infamous 2009 assault against then-girlfriend Rihanna, an incident that has made him a lightning rod ever since, Punk tweeted that he would like the R&B star to “fight somebody that can defend themselves.”

“Me curb stomping that turd would be a #wrestlemania moment,” he added.

In his Twitter counterattack, Brown implied that CM is too jacked up on steroids to “pleasure a woman.” That, in turn, led CM — an adherent of the straight-edge lifestyle who is opposed to drugs and alcohol — to kick things up a notch and post a TwitVid.

After dismissing the ‘roid accusations, CM says that Brown has not “paid for what he’s done.” He goes on to challenge him to a fight, proposing that all proceeds from the bout benefit a women’s charity.

“I will choke you out and I will make you feel as weak and as powerless and scared and alone as any woman who has had the misfortune of knowing a sad, cowardly little boy such as yourself,” Punk says.

“I just know that some day, somewhere, somehow, somebody will put Chris Brown exactly where he belongs, and it honestly doesn’t have to be me,” he adds. “I would just really like it to be.”

Brown responded by starting the top-trending hashtag #Notnopunks and listing off the WWE wrestlers he considers to be more enduring, among them Coco Beware, “Rowdy” Roddy Piper and Bret “The Hitman” Hart.

“We got them #Notnopunks tshirts on deck!” he tweeted last night, suggesting that even if he’s not about to get in the ring, he’s got the pro-wrestling bravado down pat.