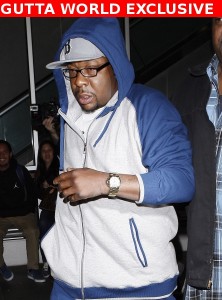 As reported by TheBoomBox, Bobby Brown was taken into custody by California police Monday (March 26) on suspicion of driving under the influence, according to TMZ. The ex-husband of Whitney Houston was driving in Reseda, Calif., when officers witnessed him speaking on a cell phone while operating a vehicle. He was pulled over at 12:20PM PST and subsequently arrested due to cops suspecting him of a DUI.

The 43-year-old “Humpin’ Around” performer is currently in a Van Nuys jail. Authorities have not released information on the substance they believe Bobby Brown to have been on while operating his vehicle. This incident isn’t Brown’s first encounter with a DUI arrest. In 1996, the New Edition crooner was arrested and convicted for driving under the influence in Georgia. He plead guilty to the charge and served eight days in jail.

After the passing of Whitney Houston on Feb. 11, Brown has made headlines for continuing on with his performances and even shopping a biopic centered on his life.