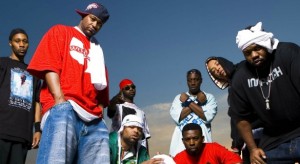 Veteran Hip-Hop group Wu-Tang Clan is preparing to release a new album titled Legendary Weapons that will be released next month.

The new, 14-track album features guest appearances from each original Wu-Tang Clan member, along with a number of respected rappers.

According to a press release, Legendary Weapons features a throwback sound that has been inspired by Kung-Fu imagery, a long running theme in Wu-Tang Clan’s album releases.

Legendary Weapons is due in stores on July 26th.

4. Played By The Game