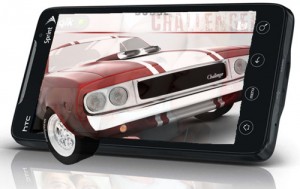 Today is a very special day for HTC, as they are releasing the HTC EVO 3D. The company could not have launched the device on a better day than today, as it is the last weekend of the month and people will be spending the money that has been put into their accounts by their employers.

Well that’s all we have to offer you, but we would like to know if you bought one of these devices today?

The 3-D technology is the most boasted-about feature on HTC’s new EVO 3D smartphone, which went on sale Friday. You can watch 3-D movies and play 3-D games without putting on annoying glasses. You can shoot 3-D photos and videos, too.

The inclusion of 3-D is gimmicky and might make you feel nauseous, but it is creative at times and the EVO 3D is a fine smartphone overall. The phone costs $200 with a two-year service plan with Sprint Nextel Corp.

I wear glasses, so I was excited that I didn’t need to put on another pair to try out the EVO 3D. The phone creates the appearance of depth using a technique called auto stereoscopy. The screen has a layer that guides light so that the light from one pixel goes to the left eye and from the next to the right.

I got right to work watching a 3-D version of “The Green Hornet,” which came with the phone. I was wowed by a fight scene where glass seemed to be flying out of the screen. A friend I handed the phone to even flinched when the shards blew past.

I also checked out some animated 3-D clips on YouTube. The scenes that looked best were, not surprisingly, those with people and objects in the foreground and background and with things moving right toward the camera.

Whether I was watching 3-D or 2-D videos, the phone’s 4.3-inch touch screen was crisp and colors looked vivid.

That said, my brain wasn’t thrilled about processing the 3-D images, so I couldn’t stare at the display for long without feeling queasy.

It was also evident that I wouldn’t really be able to share the dizzying experience with friends unless I handed them the phone. You need to tilt the EVO 3D in your hands until you find the viewing angle that is optimal for your eyes. That may not be an optimal angle for the person next to or behind you.

You can, however, involve buddies by letting them star in a 3-D movie or in photos that you shoot with the EVO 3D. The phone takes pictures or videos by recording overlapping images when its two 5-megapixel cameras are side by side. The camera lenses are positioned next to each other only when the phone is on its side, so you can only capture things in 3-D in “landscape” mode. 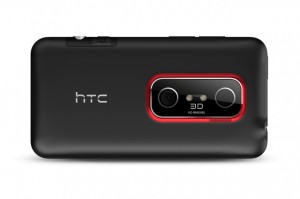 I couldn’t manage to take any great shots, however. The images always seemed fuzzily misaligned, even with the inclusion of a feature for adjusting the alignment of the images.

I was more successful with the 3-D video camera, though I couldn’t test whether objects really fly off the screen because my colleagues wouldn’t hold the camera for me so I could throw things at them (even when I promised to lob only wads of paper at the lens).

I could see how the 3-D mode might come in handy for recording sporting events, especially if you’re crazy enough to jump into the fray and fast enough to stay ahead of the action.

If you’re not into flowers or people popping out of the screen, you can switch to 2-D mode by pressing a button on the side of the phone.

I also liked that the phone had a button dedicated to the camera, which I always find easier to take photos and videos with than a virtual touch-screen button.

The phone has a front-facing camera, too, for taking self-portraits or video chatting.

Not wanting to lose my lunch all over the phone, I took a break from the 3-D features and checked out the rest of the phone.

The mostly black EVO 3D runs on Gingerbread, which is the latest version of Google’s Android meant for smartphones. As I’ve seen on other Gingerbread-running phones, the software is easy to use and speedy.

The phone uses HTC’s Sense software as well, the best part of which is a customizable smarty-pants screen that is visible when the phone is locked. You can set it to show stock quotes, weather, social network updates or other content without unlocking the device.

It was also easy to type on, as it includes the uber-useful Swype keyboard software, which lets you slide your fingers on the virtual keyboard to type. I also liked the inclusion of an FM radio, as it offers a way to listen to tunes without requiring Internet access or the storage of songs on the phone itself.

Aside from the stomach-churning aspect of the 3-D feature, I had only a few complaints:
— I still make plenty of calls on cellphones, so I was disappointed that the EVO 3D’s sound quality wasn’t very good, with voices sounding muffled.
— The phone’s battery life wasn’t fabulous. In a day of heavy usage, which included making phone calls, recording and watching 3-D videos and surfing the Web, I got 5.5 hours before needing a recharge.
— I missed having a built-in kickstand, a feature available on the EVO 3D’s predecessor, the EVO 4G.

Nonetheless, the EVO 3D has strong software and plenty of other useful features. Although 3-D is touted as this smartphone’s coolest feature, it’s merely a silly extra that’s occasionally useful than a necessity. And beyond that, the phone has a lot more to offer that won’t make you feel queasy.