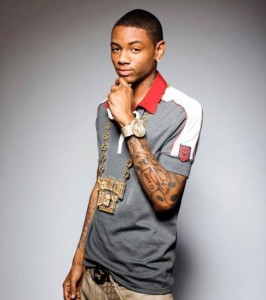 Atlanta rapper Soulja Boy has issued a statement regarding racist messages posted on his Facebook page over the weekend.

Fans of the rapper were shocked on Saturday (June 11th), when he took to his Facebook page to lash out at people who were apparently leaving negative comments on his wall.

“IM TIRED OF WHITE PEOPLE DOING US LIKE THIS MAN!! THEY TREAT US SO WRONG!! fuck THEM MAN ON GOD!!…I’m gonna keep talking sh*t to these white faggots until they unlike my page. fucking weirdo stalkers!”
The posts labeled his haters ‘so fucking stupid” and claimed that white people were holding him down.


“I wanted to clear the air and let everyone know that my Facebook got hacked,” Soulja Boy said. “I had administrators on my account that no longer work with me. The hackers used these old accounts [to] post hateful messages. This is not done by me or anyone on my team and I’m upset that I am being labeled as a racist and homophobic person.”