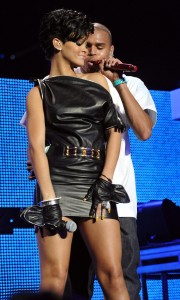 Rihanna and Chris Brown are reuniting for the Bajan beauty’s ‘Talk That Talk’ track ‘Birthday Cake,’ co-produced by Da Internz, and the news is sure to upset one-sided fans, Brown’s girlfriend Karrueche Tran and critics.

Earlier this week, the producers of the song hinted to MTV News that “the feature on [the remix] is gonna shock the world.” Now, MissInfo.tv reports that Chris Brown is indeed on thenew version of ‘Birthday Cake’ and is even in the accompanying video, which was revealed to her by two unnamed sources. The ‘Fortune’ creator supplied two verses for the song: one where he’s singing and another where he’s rapping in the spirit of his Busta Rhymes and Lil Wayne-assisted hit ‘Look at Me Now.’

Earlier this week, the two attended the 54th Annual Grammy Awards, where they both performed. The event was the first time Brown and Rihanna made an appearance at the prestigious ceremony following the highly publicized 2009 domestic violence assault, which resulted in the latter being beaten by the ‘Turn Up the Music’ crooner.

Reports surfaced that Brown also showed up at Rihanna’s early birthday party — she celebrates her actual born day on Feb. 20 — at the Hearst mansion in Beverly Hills. The 22-year-old singer arrived with Rihanna, 23, according to MissInfo.tv. He stayed throughout the night and apparently, the two were more than platonic.