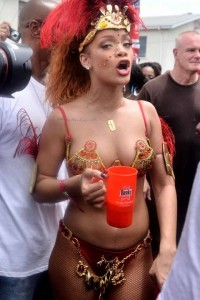 While most of us woke up and went to work this morning, Rihanna got up, slid into this a pile of ruby fishnets and started downing rum out of a cup she found lying next to a chicken coop.

From there, it was only another a matter of more rum until she thought simulating doggy style sex on a parade float would be an awesome idea. And when isn’t it? Anyway, all this is to celebrate Kadooment Day in Barbados which I’m just going to assume is some sort of ritual to declare a new queen of da island.