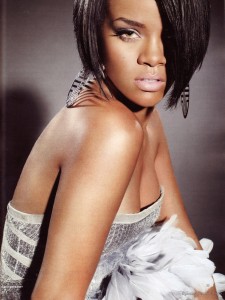 Recently, pop princess Rihanna sat down with MTV News to discuss her work with breakthrough female emcee Nicki Minaj, who’s much hyped-over debut album Pink Friday hits stores on November 23. According to Rihanna, the female-only collaboration occurred not once but twice — first on her 2009 album Rated R and again on her latest effort Loud, which also hits stores later this month.

“We did work together on music for [Loud] as well as [for] Rated R. It was the end of the album, but she was sending me these incredible songs,” Rihanna told MTV News of her work with Minaj.

“I wanted some up-tempo stuff from her that was kind of gangsta, but she sent me these ballads and they were beautiful and I couldn’t believe that it was a female MC writing these songs. She’s really talented and I want to work with her again.”

Currently, Minaj appears on Raining Men, a single that was recently leaked off Loud and features the self-proclaimed Black Barbie rapping in an adopted Caribbean accent. As for Rihanna’s work on Minaj’s Pink Friday, the Barbados-born beauty kept mum about the details.

“We also worked together on her album. I can’t say…actually, the reason I can’t tell you is because I don’t know the official title of the song. It might be Too Fly, I’m not sure if that’s the confirmed [title],” the pop star said. However, following the interview MTV confirmed that the track is simply called Fly.

Currently, Loud, which is scheduled for release on November 16, already has two popular singles to its name — Only Girl (In the World) and What’s My Name.

In a previous interview with MTV, Rihanna also confirmed that the new album will be much more upbeat than Rated R. “A lot has, I won’t say changed, but a lot has evolved since then,” she said. “A lot of growing up, a lot of responsibility in terms of taking control of my business and stuff like that.”