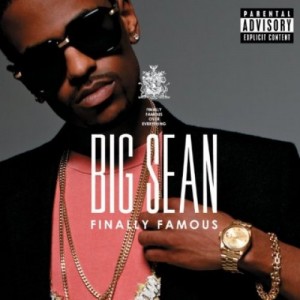 Big Sean maybe new to a lot of people, but he has actually been around for a cool minute. Sean met Kanye West at a radio station in 2005 and left him his demo tape. Dropping mixtapes and remixes paid off as Kanye signed the Detroit native to his G.O.O.D Music record label in 2007. Four years later, the 23 year old dropped his debut album Finally Famous: The Album.

There are two things that can sum up the project: One, is the over packed guest appearances. Features from Chris Brown to Lupe Fiasco to Kanye West to Wiz Khalifa to Rick Ross is a little much. And the second being, he is in the Drake/Wiz Khalifa catalogue…a rapper singing. Not that it is a bad thing. But at times, it’s easy to forget who you are listening to.

But there’s no need to worry because the album has a lot to offer. From fresh beats to clever lyrics, the album is fitting for the summer. The lead single My Last, featuring Chris Brown, could be the song the people will recognize but there are plenty of other good ones as well. Marvin Gaye & Chardonnay, featuring Kanye West and Roscoe Dash, is one that will bang in the clubs for sure. Memories (Part II), featuring John Legend, is a cool track that has Sean reminisce about his past. While Livin This Dream has Sean talking about his flashy life with some assistance from The-Dream. Celebrity, featuring Dwele, might be the smoothest track of them all. This in part has to do with Chicago producer No I.D. as he is responsible for producing half of the album. Others include The Neptunes, The Legendary Traxters, Mike Dean, Tricky Stewart, Boi-1da, and Exile just to name a few. Needless to say, there are plenty of beats to choose from. This alone makes the album a great listen.

However, there are some negative spots on the album as well. Songs like I Do It, Dance(A$$), and High are either forced or flat out corny. But thankfully, it’s only a small list. With a boost from top beatmakers and a major league guest lineup, the album is solid. It’s rare that a new artist gets this much for his debut album. But Sean takes advantage of it and delivers. Only question now is: What will be in stores for his next album? But being in a roster like G.O.O.D Music, there’s no need to worry.