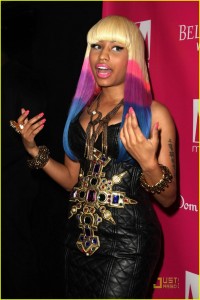 Nicki Minaj made her irritation with the constant comparisons to Lady Gaga apparent during a recent interview with ABC’s Nightline. She dared the network’s Juju Chang to find any similarities between her and the outlandish pop singer, and for the most part dismissed and minimized the things they do share in common and harped on one glaring difference: she’s a rapper.

“We’re in completely different lanes,” said Minaj of Gaga after admitting that being compared to the pop diva “irks” her. “I’m a rapper… Gaga’s a fantastic artist, you know, she paved her way. She’s opened her own lane. But I think that I have my own lane. And we never cross. Ever. So, you know, I really don’t get the comparison anymore. Our music doesn’t sound the same. Our stage presence is not the same. I just can’t see the similarities.”

Minaj has been compared to Gaga since the beginning of her career and her much-talked about Grammy performance only led to more comparisons between the two. But with the release of her sophomore effort, the Young Money rapper has made it clear that she stands tall — alone.