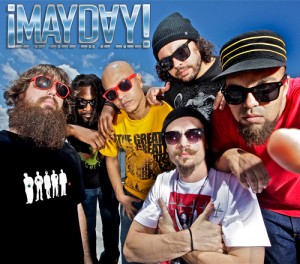 Rising Miami hip-hop band MAYDAY is preparing for the release of its first album for Tech N9ne’s Strange Music. The 6 member group’s album “Take Me To Your Leader” is set for release on March 27, 2012.

The group is comprised of Wrekonize (MC/Vocalist), Bernz (MC/Vocalist), Plex Luthor (keyboards, guitar, and production), Gianni Cash (bass, production), L T Hopkins (drummer) and NonMS (percussion) are one of rap’s few legitimate bands. Their multi-layered sonics, creative lyrical approach and high energy shows earned them such famous collaborators as Cee Lo Green on the viral hit “Groundhog Day” and Lil Wayne in the videos for the YMCMB honcho’s “Da Da Da” and “Get A Life.”

Take Me To Your Leader features the sinister “Badlands,” the apocalyptic “Death March,” the tense “TNT” and the macabre “Due in June.”

“Death March” will be the band’s first single from their forthcoming album.

In order to prepare for the release of its album, MAYDAY will be joining Tech N9ne and Machine Gun Kelly on the groundbreaking “Hostile Takeover 2012” Tour, which includes 90 shows in 99 days, making it the longest tour in rap history. MAYDAY are no strangers to the Tech N9ne tour circuit, having appeared with Tech in 2011 on the “All 6’s and 7’s Tour.”