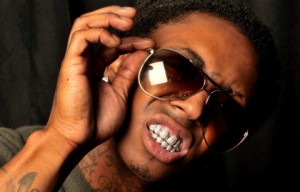 The mouthful of sparkle told you exactly how Lil Wayne was feeling. Flashing his bling-crusted grin from ear to ear, the rapper (and, let’s face it, rock star) was fired up and in charge at the Dunkin’ Donuts Center on Wednesday night.

“This is my first time on a stage in over a year,’’ he told the shrieking sold-out crowd on the first stop of his new tour. “I swear to God, I was in a place a few months ago I couldn’t even imagine this [expletive]. But now that I’m here, it’s better than I ever could have imagined.’’

Wayne was referring to his newfound freedom after serving eight months of jail time on a weapons charge. He was an inmate at Rikers Island as recently as early November, but on Wednesday he was back to selling out arenas with a performance that was assured, steady, and oftentimes blistering.

It was hard to tell who was happier that Wayne was back: the performer or his fans. They roared as Wayne, backed by a tight band, sprayed his rhymes like machine-gun fire on “A Milli,’’ “Bill Gates,’’ and “6 Foot 7 Foot.’’

After an intense half-hour, Wayne ceded the stage to Nicki Minaj, whose set was as much about the music as her cartoonish theatrics. With a blond fright wig towering on her head and five female back-up dancers swirling around her, the rapper-singer revved up with “Roman’s Revenge.’’

While eminently amusing, Minaj came rather close to sinking her own performance with an extended set of sugary ballads (“Right Thru Me,’’ “Fly,’’ and “Save Me’’). When Wayne reappeared for a second set, Minaj rebounded nicely on “Roger That,’’ a rap-off with Wayne that proved their chemistry was sincere, their respect mutual.

Earlier in the night, Miami rapper Rick Ross was larger than life: big presence, big beard, and big beats. Meanwhile, Travis Barker held court for 30 stealth minutes drumming in synch with a DJ and posed the age-old question: “Can a drummer get some?’’