Well I’ve been a model since the age of three. I started out modeling with Ford Models in Chicago. When I was about six years old, my mom discovered that I could sing because I was singing in my bedroom one day and she was listening by my door. And as soon as she found out that I could sing, she put me and my brother in local talent shows at his high school, and ever since then that’s when we’ve been trying to pursue my career in singing. I act also; I’ve been in the movie Lottery Ticket, Mean Girls 2, Big Momma’s House 3. I’ve done a lot of print and runways, commercials for JC Penny, Macys and things like that. And I’ve done a lot of music videos also.

GW: Tell me a little bit about yourself.
Jala: Well I’ve been a model since the age of three. I started out modeling with Ford Models in Chicago. When I was about six years old, my mom discovered that I could sing because I was singing in my bedroom one day and she was listening by my door. And as soon as she found out that I could sing, she put me and my brother in local talent shows at his high school, and ever since then that’s when we’ve been trying to pursue my career in singing. I act also; I’ve been in the movie Lottery Ticket, Mean Girls 2, Big Momma’s House 3. I’ve done a lot of print and runways, commercials for JC Penny, Macys and things like that. And I’ve done a lot of music videos also.

GW: I watched that cypher video that you did, what’s your plan now are you going to rap or sing?
Jala: Yes I was rapping in that video but, that’s just a thing I discovered I could do [Laughs]. I didn’t know I could rap, so you know I just tried it out and it came out pretty nice. My main thing is singing, but I just discovered I could rap.

GW: So your main focus is your singing?
Jala: Yep.

GW: Are you going to put out an album or a single?
Jala: Yes, my single will be out soon. I’m putting together a mixtape now, so be on the lookout for that.

GW: What’s your single going to be titled?
Jala: My single is called Stereotype.

GW: When is it going to be released?
Jala: I’m not sure actually, but it will be this year.

GW: Will you be doing a video for Stereotype?
Jala: Yes, management is trying to get that to happen and I hope so.

GW: How would you describe your style of singing?
Jala: I’m pop, but I would say my style is more like Kesha with a little bit of Rihanna. So it’s kind of like, edgy. My voice is very versatile, so I can do country, rock and R&B, I can do a lot with my voice.

GW: Are you in school at the same time you’re busy with all of this?
Jala: No, I’m homeschooled. [Laughs]

GW: What are you working on right now?
Jala: Right now I’m working on getting a deal. I have my EPK set up and everything, and I have a couple of major record labels looking at me. So that’s our main focus right now.

GW: Which labels?
Jala: I have Jive Records and Def Jam looking at me.

GW: When did you do the cypher?
Jala: I did the cypher about 3 months ago. Yeah the cypher was amazing and everybody was incredible. It’s a thing that we have, it’s called New Generation. It’s all the new talent ageing from 13 to 16. But yeah, everyone was so wonderful and I had so much fun.

GW: What exactly is New Generation?
Jala: New Generation is, it’s not a group or anything. It’s just a group of kids, young teens, getting together and doing something positive and showing off our talent. And basically to inspire every young person that you can do it. It’s not hard, just have fun with it and be yourself.

GW: Is it a group of your friends that you created together or is more of an organization?
Jala: No, it’s a group that we created together. It’s just something that we decided to do one day.

GW: Do you have more videos that you have done together?
Jala: No, that was our first video actually, and people are asking for a second video and a second song. We are trying to put a second video together.

GW: You mentioned your style is a lot like Kesha and Rihanna, are they your role models?
Jala: Yes! Rihanna is awesome on stage and so is Kesha. Every time I hear Kesha’s songs it gets my hyped, because she has a great delivery and her songs are awesome. I also look up to Beyonce, of course she’s great. As far as old school, I look up to Aretha Franklin and Whitney Houston, her voice is wonderful. Yeah that’s pretty much it for who I look up to. 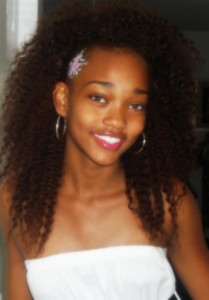 GW: What do you want your fans to know about you?
Jala: I want my fans to know that I’m a regular person and I do typical stuff. Singing, acting, modeling and dancing that’s just what I like to do, it’s just a hobby that I do. But I want them to know that I thank them for supporting me of course and I appreciate everything that they have done. My Twitter followers have went up dramatically within a month and I’m really shocked with that, so I want to thank them for that, and for subscribing to my YouTube, just everything, they are amazing.

GW: You have a lot of videos on YouTube, but known of you singing.
Jala: Yeah, I can’t post any of my singing yet because of the record labels, but when I get the ok I will. I’ve wanted to put singing videos up for a while.

GW: What is it that you like about performing?
Jala: I just love getting on stage and feeling that energy from the crowd, it’s just so amazing. I feel like when I’m on stage I can just escape from everything and I can let all of my emotions out, you know just have fun. I just feel like being on stage is home.

GW: With all of the music videos and movies you’ve done, who have you enjoyed working with the most?
Jala: All of them are great, but I had a wonderful time on the set of Lottery Ticket. T-Pain’s energy was just amazing and he kept me laughing. Bow Wow’s energy was amazing as well. So their two funny people and I laugh a lot anyway, so I love when people make me laugh. So I’d definitely have to say Lottery Ticket.

GW: What do you know when you’re not working?
Jala: I really just finish up my school work or get on Twitter, Facebook, Tumblr, just typical teen stuff. Listen to my iPod, blast my music, text, talk on the phone or even go to the mall and chill with my friends.

GW: Are you getting noticed a lot more when you go out?
Jala: Yes I am. I think it’s actually really cool that people recognize me from everywhere. They’re like aren’t you that girl from Facebook or aren’t you Jala Shay. [Laughs] I even get asked for my autograph, its wonderful and I appreciate it a lot.