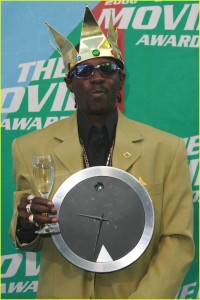 Flavor Flav, 52, was arrested in Las Vegas on Friday after getting pulled over for a routine traffic violation when the arresting officer found the rapper had four warrants out for his arrest, E! Online reports.

Flavor Flav, whose birth name is William Jonathan Drayton, Jr., had four separate automobile-related tickets which he had never dealt with – two cases of driving without a license, one incident of driving without proof of insurance and a parking violation.

The rapper was booked at a Vegas jail and eventually released. Flavor Flav addressed the arrest on his Twitter page, acknowledging that it occurred as he was returning home from Benihana’s restaurant and was pulled over by a “curious rookie” cop.

“He found out I had a traffic warrant wanted to make a name for himself took me in,” Flavor Flav Tweet, “and now I’m home laying my bed what’s the big deal?!”

The rapper has had his share of legal troubles, he spent time in jail for robbery and burglary before dropping out of high school and pled guilty and spent 30 days in jail in 1991 for assaulting his then-girlfriend Karen Ross. In 1993, he was charged with attempted murder for shooting at a neighbor and in 2002, he spent nine weeks in Rikers Island jail in New York for driving with a suspended license, violating probation and numerous unpaid parking tickets.

Flavor Flav closed his fried chicken restaurant in Iowa last week, just three months after it opened due to a dispute with his business partner. The rapper graduated from cooking school in 1978 and worked as a head cook in several restaurants.

Flavor Flav, rose to fame as a member of the rap group Public Enemy and is known for sporting a clock around his neck. He has been the subject of a Comedy Central Roast and starred in VH1’s reality shows, “The Surreal Life,” “Strange Love” and the “Flavor of Love” dating show.

Flavor Flav has also been keeping busy with his autobiography, “Flavor Flav: The Icon,” which is set for release on June 1.