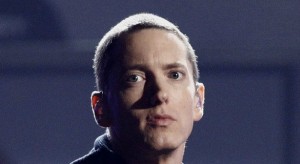 Unless you’re counting host Ken Jeong’s decision to dress as Flavor Flav and then crawl under Nas’ legs, Eminem offered the biggest Hip Hop presence at Sunday night’s Billboard Music Awards. It should be noted that Em didn’t actually attend the mostly Pop affair, which was dominated by the likes of Justin Bieber, Beyonce and Britney Spears.

While the selection process by the National Acacemy of Recording Arts and Sciences has recently come under fire for their more subjective methods used for selecting Grammy Award winners, Billboard stated, “all finalists and winners were determined by a combination of chart performances.” The eligibility period for nominations ran from February 28, 2010 through March 1, 2011. The amount of their respective awards reflected the strength of Eminem and Bieber’s current sales. To date, Em’s Recovery has sold over 3.8 million copies, while Bieber’s My World 2.0 has moved over 2.7 million units.