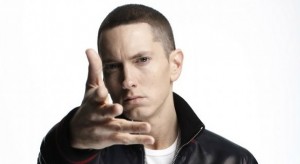 Eminem and his newly signed artist Royce Da 5’9″ recently sat down with MTV’s RapFix Live to talk about the much-anticipated collaboration EP, Hell: The Sequel, and why Dr. Dre is absent from the project.

While Hip-Hop fans are excited about the reunion, legendary producer and longtime Eminem collaborator Dr. Dre is not providing beats to Shady and his new partner.

“I think Dre is, like, really cracking down on getting Detox finished, so I think he’s more so focused on that,” said Eminem.

“I really didn’t say anything to Dre till kinda like the last minute. We didn’t really say anything to anybody about what was going on because we weren’t sure what was going to happen with it,” continued Em. “It wasn’t like I said, ‘Yo Dre, can we get a beat for this project that we’re workin’ on?’ Because it wasn’t really necessarily a project yet.”

Slaughterhouse member Royce added that the duo didn’t really reach out to any producers in particular, saying they were “just cuttin’ random.”

Watch the interview below: