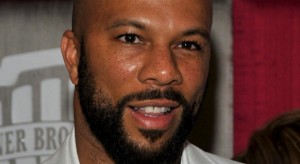 Chicago rapper Common has inked a new deal with Warner Brothers Records according to reports.

Common and Warner Bros. co-president/CEO Todd Moscowitz made the announcement yesterday (June 24th), during an outdoor concert in New York.

According to Billboard.com, Common addressed the crowd in the Warner Bros. records courtyard, where he expressed gratitude for the new deal.

“We have very inspirational, exciting music to team up with you. We’re just open to what this change can bring,” Common said.

Common began his recording career on Relativity Records, which was eventually acquired by Sony Music Entertainment.

The rapper/actor released three albums with Relativity, including 1992’s Can I Borrow a Dollar?, 1994’s Resurrection and 1997’s One Day It’ll All Make Sense.

Common’s stint with Universal began in 2000, when he signed with MCA Records and released his first album for the label, Like Water for Chocolate.

Common, had been signed to Universal Music for the past 10 years.