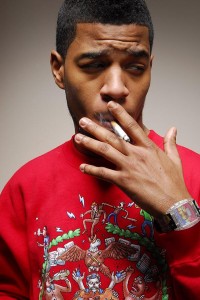 Kid Cudi and Wale are at odds and the fray has spilled into the public.

The bulk of the beef manifested itself in an interview with Complex magazine, where Kid Cudi explained that he was “unfuckwittable.” He said that Wale, a former friend, made reference to him where there was a comparison to various genres of sports.

“Did you see that Wale interview that he just did, comparing us to sports? Let me clear this up: I’m incomparable to anybody. I don’t care how people take that. No one can compete with me. I’m unfuckwittable; no one can knock me off my shit. I’m an unstoppable force, I’m a bullet. My trajectory is to the sky. Niggas got to do something really spectacular to fuck with me and my realm, and niggas be so bitter that you hear it in their voice.”

The freestyle from Wale made reference to an incident where Cudi punched a man that got on stage during his performance. Cudi also said that Kanye West, who signed the Cleveland rapper to G.O.O.D. Music, doesn’t like Wale’s music.

On Twitter, Wale responded “niggas lettin that liquid cocaine get to them…..lets go then.” The remark is a slight to Cudi’s arrest in June on charges that he was using the substance. Cudi has since admitted to using it.

Cudi said he would no longer tolerate disrespect his interview with Complex.

“The last album, I let people dis me, throw out those jabs in their verses and have their little slick remarks. This time around, I’m not fucking around. I have no time to think about other niggas. These other motherfuckers like feeding off another nigga’s energy, so they mention their name. You hear me talk about niggas? I don’t even talk about Kanye, and that’s my homeboy! They talk about Kanye like they’re bosom buddies with this nigga. Talking about “I be in Hawaii”—man, shut the fuck up, why you got to tell everybody everything? Then people like Wale get mad that ‘Ye ain’t give him no beats—’Ye ain’t give you no beats because we ain’t fucking with your raps. It’s not a conspiracy theory. We don’t f*ck with you musically, so we’re not going to provide music for you. The shit is a service, it’s a quality of a certain standard. Niggas are just so thirsty it’s ridiculous. I’ve been eating humble pie forever, and people still call me an a**hole. These people don’t know my fucking life—now I’m going to give them something to talk about.”

Wale has not commented further.