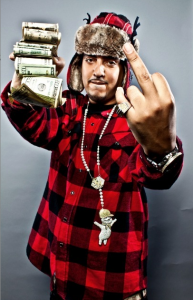 Recent Bad Boy signee French Montana has entertained deals from a variety of labels, but in a recent interview with Hot 97’s Angie Martinez, the ‘Shot Caller’ rapper revealed that his email illiteracy actually cost him a deal with Kanye West’s G.O.O.D. Music label.

“I met up with him one time and then I met up with him again. There were things that I was used to ’cause I was already moving. I’m like a money train,” the 27-year-old Moroccan-born MC said.

Unfortunately, his inability to use email rendered French’s communication with his potential boss null and void.

“Kanye doesn’t have a phone. If you need to get in contact with Kanye, you have to email him,” French explained. “You can’t tell me how to do that. I don’t know how to use an email, so I guess me and you is never gonna talk, and I’m a put my career in your hands?”

French continued to say that he had great respect for ‘Ye, and that, had he signed with his label, the two would have made “history” together.

“He’s definitely talented and I felt like if I went there, we would have definitely made history,” he concluded.

French is currently gearing up to release his Bad Boy debut, co-executive produced by Diddy and Rick Ross.